skip to main | skip to sidebar

We had a busy weekend getting the tree, Christmas party. I am so beyond lucky this Season.Charlie's adoption was finalized on November 29, got in mail Dec. 1 the day before my birthday and right before the holidays. I think extended family still had a lot of doubt if Charlie was staying with us. I can emphatically say, "YES" and shout it from the rooftops. She's here and we love her little spunky attitude.

Sunday, we had brunch with Santa at the Carolina Inn. It was decorated so beautiful in the 12 days of Christmas with real live turtle doves. The kids were in awe. They ate tons of food, got the arms painted, then saw Santa. My phone sucks, so you won't see high quality pics, but here are some of my fave: 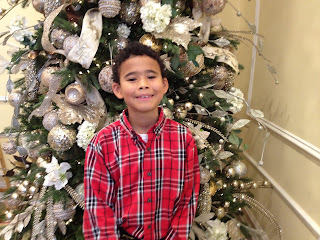 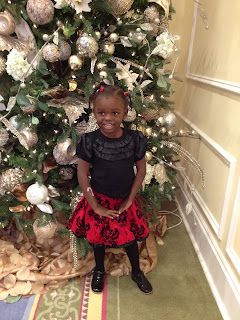 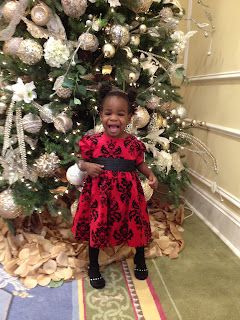 My beautiful Family 2012, so many blessings 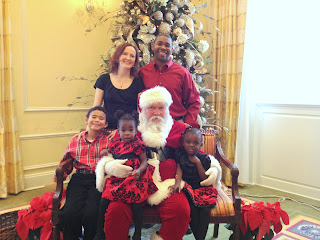 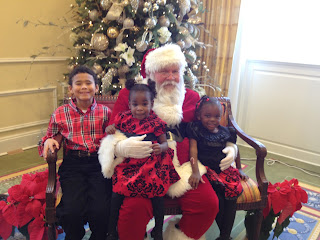 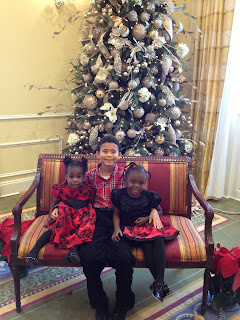 Posted by CandCFamily at 11:27 PM No comments:

We asked the kids this morning what they are thankful for.
M: My brother and watching him play baseball
Charlie: Baseball!
M: My mother and my brother taking me Trick or Treat
Charlie: Halloweeeeeeeen!

Those girls are so sweet and funny. They absolutely loved Halloween and it's funny a month later they still talk about it.

I am thankful for my wonderful husband, great kids, and that Charlie may be finalized by the end of the month or the end of the year. I have so many things to be thankful for this year. I am so lucky to have three wonderful kids and a husband that supports us in all our crazy adventures.
Posted by CandCFamily at 8:50 AM No comments:

We have filed the paperwork for Charlie's adoption and now it is just a waiting game until we have the final decree in our hand. The goal for the court right now is to finalize for the November adoption party this year. We went down to the courthouse with her again just like we did for M's adoption filing. It is pretty uneventful, you pay a filing fee, hand over your paperwork and that's it. But it is a culmination of waiting, waiting, and more waiting and then a huge sigh of relief. It's signed and delivered. I knew she wasn't going anywhere, but it is good to have it filed with the courts. I will be very happy to get her decree and maybe start planning another vacation. I'll wait a little while before I try rushing to get a passport for her as I now know it is not a simple process to eventually get that birth certificate.
On the upside, we no longer need permission to travel with her (though after Myrtle Beach, Disney, Myrtle Beach again) we don't have any immediate travel plans.
I am so happy with our family! It is so amazing that we have been blessed with such amazing kids. 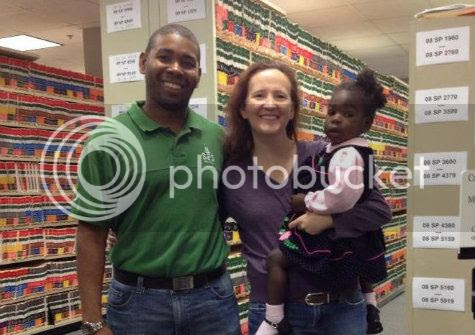 Charlie’s placement hearing was supposed to be today. I actually didn’t even know it was today until I got a call asking for what her full name will be. Turns out, it got delayed until the 27th. One of the workers had an emergency with another child. I am so glad she is not our first placement/adoption or I would be worrying my head off right now.
It is my understanding that the placement hearing is simply her worker, our worker, the adoption resourcing team, the adoption supervisor and other family service employees. They discuss our profile, her profile and formally agree to the adoption, begin the adoption application, and staff the adoption. Staffing means who will be our long term adoption worker, etc. In my mind, it is all a formality.
Her parents have relinquished specifically to us, the workers and GAL all agree her best interest is to remain with us. I really would not have known it was even being discussed/happening if they didn’t need to know what her adoptive name will be.
But, it is delayed now until September27th, but likely I won’t even hear anything that day. As time goes slowly, I am estimating that adoption paperwork will be ready to file sometime in late October/early November and then finalization 4-12 weeks after that. I heard M’s was so fast because it was summer and they had interns and things move quicker in the summer, so maybe we will be finalized in late 2012, more likely early 2013.
I am really Zen about the whole process right now. I am 99% sure she isn’t going anywhere else, can’t wait until I am at 100%, but it’s not much longer.
Posted by CandCFamily at 2:24 PM 2 comments:

The last project I made for Disney was Minnie Mouse pillowcase dresses. I have made a few and I use a pretty rough pattern that I doubt I’d remember if I had to since it was a compilation of three different blog tutorials. Luckily, I remembered my friend Kim’s post about all her Disney clothes she did for her trip to Disneyland and we had even discussed that the tutorial she used was super easy. I decided that since I was crunched for time, I would do a very easy one.

It took me a few reads to get it, but once I did, the dresses were super easy. I then copied Kim’s idea and added the letters to the dresses. I just free handed the letters, the traced backwards onto the steam a seam. Pretty simple. The only down side is the expensive Disney fabric is super thin, but I am thinking the girls will appreciate that in the Florida heat. 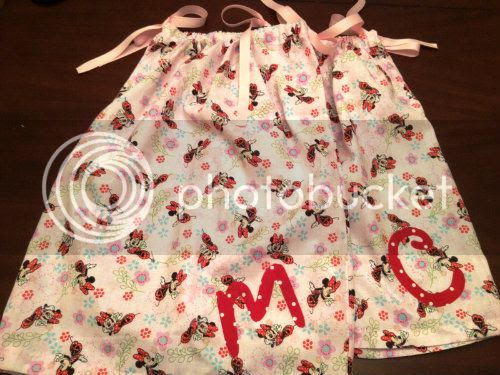 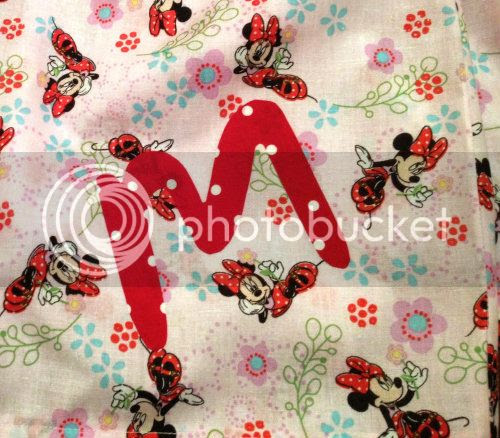 Posted by CandCFamily at 6:13 AM No comments:

I found a tutorial on making lanyards for Disney. So I decided to make the girls matching lanyards for pins. I knew they wouldn’t really get the whole pin trading thing yet, but they would like having a little lanyard like their brother.

I remember our first trip to Disneyland with the dude and my dad bought him the Buzz Lightyear one he still has. He then got him a few pins to trade but the dude would NOT trade even the duplicate pins. He insisted they were his and he was not giving them away. It was kinda funny, we both tried to get him to get into the trading but he didn’t. This time he was all about trading and collecting the pins. 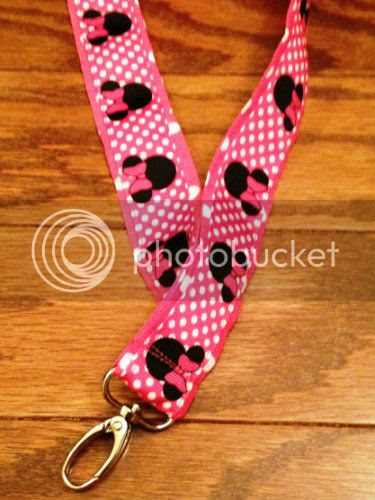 Posted by CandCFamily at 7:56 AM No comments:

The next outfit I made was Minnie skirts for the girls to wear with the Minnie/Mickey shirts I made. I loosely followed this blog. I wanted the bottom tier to be longer so I kinda reversed it. I had just made the tiered skirt so I used pretty much the same measurements I used for the top layer, it was 5 inches X 21 inches for the baby (2T) and 6X21 for the older one (4T). The second layer which is the black with white polka dots was 2X21 for both. This is where it was different than the blog, so instead of a small piping, mine ended up with about a ¼ - ½ inch border between the layers. Turned out very cute, just different.  The third layer was roughly 7X21 and 10.5X21 for the girls. I also used one long piece for each layer which made it easier, in my opinion. It just depends on how your fabric is cut. This way, I only had to sew them together, then sew up the sides, then sew a casing, and add elastic.

I ironed the middle piece in half and lined it up to the right side of fabric and sewed together: 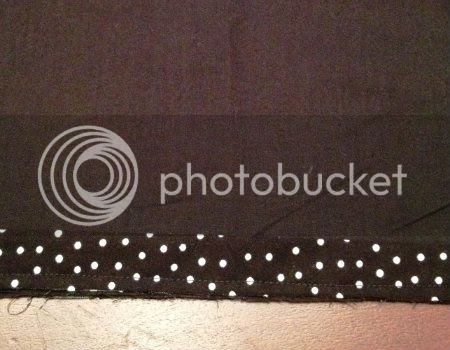 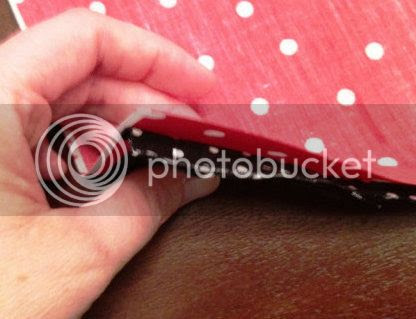 Here are the finished pieces sewed together before I sewed the sides together to make it a skirt: 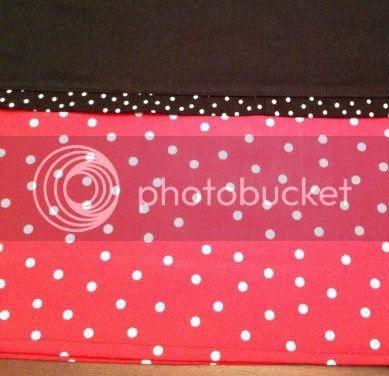 Here is the finished skirt: 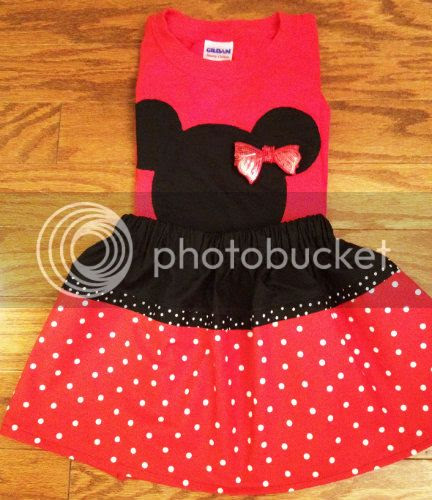 Here are both skirts with the Minnie shirt: 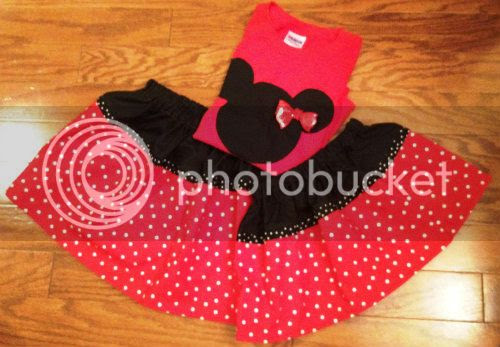 Can’t wait to take some pictures of the girls with Minnie in these.
Posted by CandCFamily at 1:48 PM 2 comments:

CandCFamily
North Carolina, United States
Hi! I am Carly, a wife and working mom. Chris and I have been married for 10 years. We live in North Carolina. Our adorable son C (Dude) is 8 and claims he has a brother Calvin, our 10 year old mutt, and sister Cuppy, a 3 year old three-pound Chihuahua. We started to foster our sweet Miss M (aka Chica) in January 2010 and adopted her in August 2010 just after she turned 1 after she had been with us for 7 months. We are currently fostering another sweet little girl Miss D (aka Chica2, Charlie). Email me at thecandcfamily @ gmail [dot] com